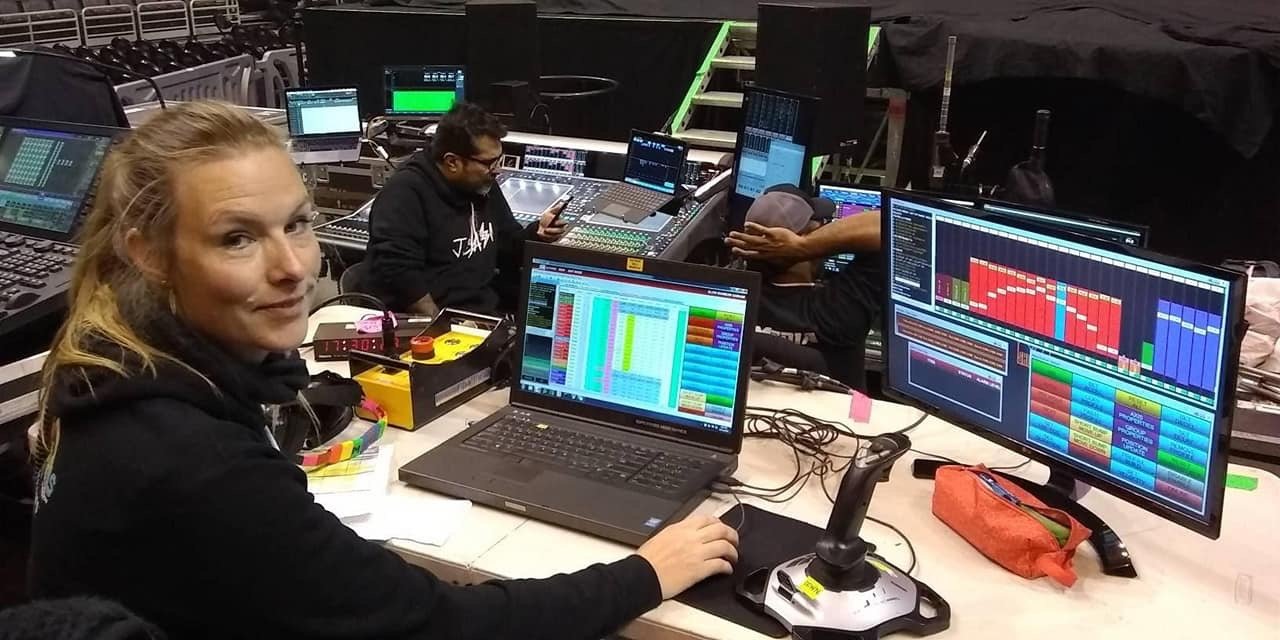 All About Automation! with Mimi Stal

My name is Mimi, I’m an automation operator and programmer and this is my story:

An Automation Programmer/Operator programs the moving objects (lifts, moving scenery on winches or smart chain motors, performer flying) and will control them during the show from a front of house position.

With a passion for live events, I organized live shows for video game company Blizzard Entertainment in France, but I wanted a different challenge.

Therefore, I decided to try to get into the live music/touring industry and contacted Jake Berry, who turned out to be one of the most important people for the start of my career. Jake Berry is a Production Director and represents Jake Berry Productions. He worked in this role for groups such as AC/DC, The Rolling Stones, U2 and Metallica. Jake would always answer all my questions and advised me to “try it all, pick something and go for it”.

After working locally for Live Nation in stadiums/arenas in Paris FR as a stagehand and a local Production Assistant, taking on every gig that I could get, it helped me get the Beyonce and Jay Z’s OTR II World Tour. Ben Brooks of Brilliant Stages offered to train me as a versatile automation tech/operator/programmer.

After spending time at Brilliant Stages, getting my 3D programming certificate in the Raynok operating system and learning how to build drives and the specific electrical engineering, I did the Spice Girls UK Stadium Tour for Brilliant Stages.

Things haven’t slowed down since. I was hired by SGPS in Las Vegas as an operator and programmer and I have had the opportunity to do extensive Navigator and I/O training at TAIT in Lititz. I am eternally grateful for the people who believed in me and who helped me on my way. I’m still learning every day and always try to help find ways to improve.

Automation is a department that never stops developing, which is why I find it so fascinating. There is always something new, something that can be safer or more efficient. It needs teamwork, trust and responsibility. It’s also a department that is connected to many other departments on tour.

The work of the show starts at home, where all the equipment is put together, tested and made safe to use on tour in the specific stage design. Here the preparation for rehearsals start as well, to be able to anticipate the demands of the show designers and artist.

A lot of the automation in shows is rigged in the air, so the automation team is usually first in –and then last out of the venue. As an operator you start the day working with your crew chief to find out where the points are and where everything will go that day. Subsequently, you work with the rigging team to get the motors in place and in the air. The next part is to get the actual automation gear up – for example trusses with winches / smart chain motors / moving tracks.
All the gear needs to be cabled, connected to the drive racks and then tested for functionality and safety. Some of this will be in cooperation with other departments like video or lighting, depending what objects will be automated during the show. Often, the lifts, treadmills or other moving integrated stage parts are last on the list of load-ins. When everything is tested and loaded in, the programming starts. Again, depending on what is automated during the show, this will be in cooperation with different departments.

During the show, the other members of the automation team and often members of other teams will function as spotters. They will inform me when lifts are loaded/clear to move or when there is an issue with our gear. It will make the show run smooth and safe for all participating parties; artists, dancers, band and crew. After the show, we start loading out directly and as the rigging comes down last, we are usually last out of the venue.

It’s hard work and long days but being part of amazing shows is always worth it.

I would like to give special thanks to Jake Berry for believing in me from the start, Ben Brooks of Brilliant Stages, Amber Winner of SGPS/Showrig and Aaron Siebert and Jeronimo Carbi of TAIT for giving me amazing opportunities to develop my career as an Automation Operator and Programmer.