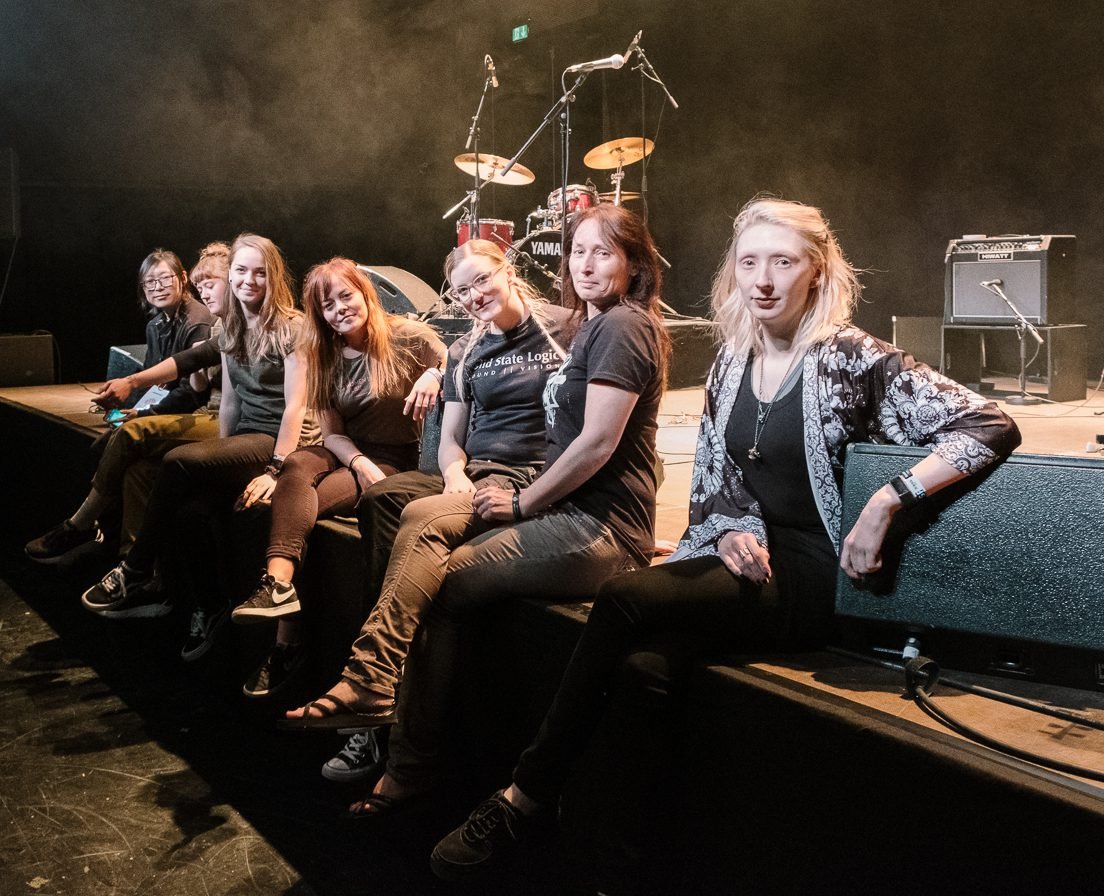 Last October, we received a call from Conny Jörgensen, project manager for ROSA (Danish Rock Council) who is behind the festival called SPOT, in Denmark.

Conny asked if WILM would be interested in running a stage at the festival with an all-female crew. This has never been done in Denmark before – In fact, it is so rare to see women working at live music events in Denmark (and many other places around the world) that some people are not even aware that they exist!

So when ROSA informed us of their initiative and offered us a collaboration crewing a stage SPOT festival this year, how could we say no?

The stage WILM was running is called Åben Scene, placed at the venue Godsbanen, and has a capacity of 240. It was a real pleasure to be asked to look after this stage, we couldn’t have asked for better conditions for the very first WILM SPOT crew!

SPOT is a festival for up and coming artists (from Denmark particularly), and has been running for 25 years. In three days, 300 acts perform on 25 stages spread all over the beautiful Danish city Århus. It is estimated that around 30,000 people visit this festival in May every year.

Putting together the crew was a bit of a puzzle at first… It turned out that there wasn’t enough resources to collect an entire crew from Denmark (eg. there is only around 9 female live sound engineers we knew of in Denmark out of +700 engineers).

We therefore opened it up to Europe, and flew in people from three different European countries.
In doing so, we managed to put together a very experienced crew, who were all very dedicated and focused on this gig.

Malle Kaas, Crew Chief says: “WILM received resumes from approximately 15 women from all over Europe for the different positions. We voted for the women we thought best suited to the different tasks and then I took interviews with everyone upfront to be make sure they were comfortable, aware of their roles, and most importantly; could be great team players. Not only did they need to be competent at their role, they also needed to be able to look after their trainees for the festival!”

WILM has a high priority to create opportunities for women to gain experience in the industry and learn from others in a safe learning environment.

So not only did we have an all-female crew, we also opened the door for less experienced women to come and be trainees at the festival.

Malle Kaas continues: “Finding trainees was way harder than we thought it would be.
We had a lot of feedback from young girls, saying that they would love to participate, but were unsure of their capacity for this gig!

I feel as though women tend to hold themselves back and don’t jump on opportunities they feel unconfident about, whereas men do. I think we could definitely learn from that, try to set our values higher from beginning of our career in this industry, rather than staying within our comfort zones.
It took us a long time to find trainees. I had to ask more than 70 festivals, venues, educational institutes etc in Denmark alone for female applicants in their first or second year. However, we finally managed to find three awesome, and very talented trainees, all from Denmark who were delighted to join the team at SPOT.

Åben Scene had only two days with bands, but 17 acts in total, ranging from Greenlandic Death metal to Reggae for kids. After a rather ‘shaky’ Friday, where the crew had to learn each others workflow and get used to the gear, they had an absolutely perfect Saturday.

Asked how people reacted to an all-female crew, Malle had this to say: “What was super great was that none of the artists or their crew/managers seemed to be thrown off by us. It all felt pretty normal. Some of them would come up to us after the show saying that they thought it was really cool to see an all-female crew.

In contrast, the local crew did not seem pleased to see us at the start – but then at the end of the festival, even they came over, asking if they could drink beer with us. So the festival ended with after-show beers for all, good laughs and lots of hugs, just like it should do!

“The audience’s reaction to our all-female crew was kind of hilarious”, Malle continues:

“During every single act, we could see a part of the crowd looking at the control position with an incredulous expression, as if they saw something they couldn’t really believe.
I think because audiences are so used to only seeing men working at shows, that it took a minute for them to sink in that this was not a ‘mistake’. It was funny though, and we actually had a lot of people taking pictures of us as they walked by.

But again, it was all positive and we had several people coming up, asking us ‘Are you really only girls up there? How cool is that!’

No doubt that we made a difference in a positive way. We showed artists and their management that there are female crew members out there to hire. And we showed a big group of people that yes, women can run a stage, covering different positions and do it to a high professional standard.”

We asked our trainees, what kind of experience SPOT 2019 was for them:

My name is Josephine, I am 22 years old and I was on Spot Festival 2019 with WILM. I participated this year as a sound trainee and had different roles before and during the shows. Mostly, my job was to patch and mic up all the bands, but I also got the opportunity to try out the job as a monitor engineer. I think it has been great just to be thrown into the things and get so much responsibility – though it did tickle a little in the stomach to start with. It has been incredibly great to get the support and trust from WILM, which I got during the festival, as it has also given me more confidence in myself and a belief that I am on the right path. I am also very grateful to have had the opportunity to work with such great female technicians as I did on Spot. As an intern in Tivoli Garten in Copenhagen, I am used to working exclusively with men, who often have their prejudices about what I can and what I cannot do. Therefore, it has been a great feeling to have 6 strong women to back me up and believe in me, when I thought I couldn’t do it.

Being a self-taught light tech at “Gimle” in Roskilde, and coming from a different type of console I was excited and a little bit nervous to try out the GrandMa3, but thanks to my Lighting Designer, Heida I quickly got an understanding of the console, and how to easy it is to personalise a setup to your liking.
The design of the console makes it so easy to programme since you have a nice easy outlook of all the faders, executors and such with the two screens, and with the touchscreen and keyboard it is easy to make changes to your setup.

Heida showed me a lot of nice features from the console but I hope I get a chance to learn more of these tricks maybe at a MA course so I can become a grandMA pro.
Heida definitely showed me that the Grand MA3 console is the way to go if you want to be able to personalize a show and still be able to make some quick changes as you go. I hope one day to go on tour with some bands and in that case I would use a MA console so I can personalize my setup and make touring easy and fun.

The experience with WILM and with Heida as my mentor was amazing and I really learned a lot about light programming at different types of shows. I really enjoyed the Grand MA3 and I cannot wait to get even more hands-on experience with an MA console in the near future!

My name is Hannah, I’m 23 years old, and worked with WILM at SPOT Festival. I’m very new to the live music scene, and primarily work voluntarily as a sound technician at Studenterhus Aarhus. This was my first time working at a bigger musical production. I mainly worked with Yu Lu as a Stage Manager, which was a very new area to me. Yu Lu offered a lot of support and she was good at treating me like an equal instead of a subject, which meant that I had a lot of opportunity to take action and to learn.

We took care of the musicians as they came in, made sure they had what they needed and were properly informed. All around we made sure that everything was running smoothly and offered our help where ever it was needed – This also gave me an opportunity to learn not only about the concept of stage managing, but actually about the all around necessities and details about a festival production.

At times when Yu didn’t need me, I got to go to FOH with Malle Kaas to look her over the shoulder, and at times I got to mix a bit at shows, which was also great practice. In all it was a really exciting experience, getting to not only work a bigger production, but also getting to do so under the guidance of these amazing women that ran the stage!

Women In Live Music and the SPOT Crew would like to thank our friends and partners for their effort and support – we appreciate you so very much.
Special thanks goes to:

The local crew at Godsbanen

Caroline Mommae for the photos

Also a very special thank you to Rune Hjort Bagterp from SC sound for taking the time with us!

And again, thank you Conny, Anders, Lasse, ROSA and SPOT festival for without whom we wouldn’t have had this opportunity to introduce the very first all female crew to Spot Festival!

For those interested, please see the technical specification here: