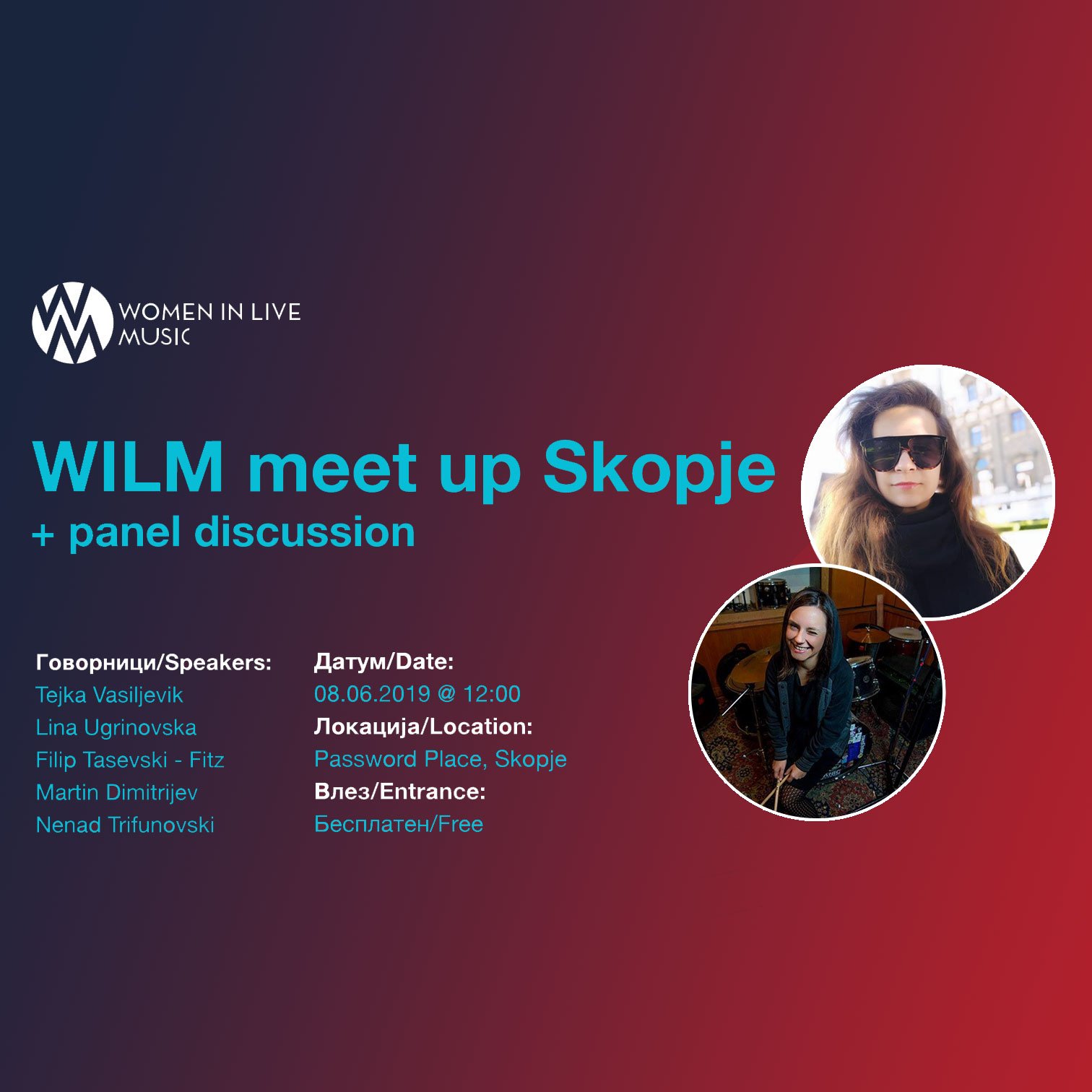 The first WILM Balkan meet up took place in Skopje, Macedonia this year in June! We are more than happy and honoured to start this new chapter in the Balkans.

We want to thank everyone who came to support this cause, particularly those who participated in the panel discussion and Password Production for providing us the space.

At this event around 15 to 20 people attended. The group contained musicians, people working in the music industry and people who were interested to know more about WILM.

We made a short presentation about WILM and opened a panel discussion (check the full agenda at the bottom).

Our panel discussion was held by 5 speakers:

Tejka and Lina talked about how and why they chose their job. Lina first wanted to become a sound engineer but she got a job at Password Production as a booking promoter and 10 years later she’s still doing that job with a lot of passion and love. Tejka started playing the drums and as time passed by, she wanted to learn how everything works behind and on stage from every point of view.

Nenad added to this that having a musical background is very important and has an influence over the women who are doing these jobs. He said that attending concerts, being passionate about music and part of the scene itself is a motivator to start doing these jobs.
All the men in the panel discussion shared their experience with working with women. These are their words:
“There is no difference who does the job unless it’s done incorrectly, but what we noticed is that women working in this industry, do the job with a lot of passion, warmness, emotions, care, you can feel it has something more, it’s not automatic.”

Filip added that while touring with his band, they met few women promoters and they were more welcoming, the food tasted better, the sleeping places were warmer and cleaner.

The discussion went very smoothly and most of the people who attended joined the conversation and asked many questions which made us very happy!

Tejka and Lina also shared the uncomfortable situations such as reactions when people see that they’re a woman. It’s very common they get doubted at first, but once the job is done, people are pleasantly surprised and drop their doubts. Comments come and go, but they don’t react to that.
Tejka and Lina always get interesting facial reactions from artists/managers when they get out of the van and they need to take the artist on a tour/festival. Some of them think that Tejka is a guy through e-mails which adds to the confusion.

Tejka shared experience of her first event working as a drum tech and backliner. The whole team on stage were men and when she showed up, they gave her weird looks. Once they started doing soundchecks some of the men asked her “Do you even know how to turn off an amp? Because if you want to do this job, you have to know everything.”
This comment was made without knowing that Tejka has been playing in bands for 13 years and in fact she does know how to turn off an amp. As the festival finished, the same men came to her and said, “Actually you know how to work.” After this event, she worked with the same stage crew and never had a problem again, just received respect and normal behaviour.

How these jobs affect our lives was also an interesting topic to talk about. Families are more or less always supportive but they still want you to change your job and find something “decent and normal”. Finding a partner is also difficult because they never trust you because you’re working in male dominated field. You find yourself also losing contact with friends and missing big occasions because you’re on the road most of the time.

In the end, nothing stops these women. The conclusion was that in our region we are faced with a conservative mentality – the women have to stay at home or work in an office, but not just in the music industry field – women from the IT field are facing the same, as well as women who want to become scientist or innovators. We need to keep an open mind and work hard. It’s a fact that when you are a woman and want to do something “unique” you always have to work harder which is irritating but it’s the reality.

Another issue is the lack of education music-wise and very small music market! We don’t have universities for music business, lighting design or event management. We don’t have a big music market where we can volunteer on events to learn these things, we don’t have workshops, we don’t have touring bands that we can work with to become a tour manager or a booking promoter. It’s very difficult just to be one thing, because most of the positions don’t even exist or the places where you can learn are not reachable in your area unlike in other countries.

The last issue is that the women in Macedonia (and around the region) have other interests rather than working in the music industry. We don’t think this is a big issue, but people in general follow what’s modern at the moment and what brings money. Working in the live music industry in Macedonia can’t pay your living costs, that’s why Tejka is working in more fields inside the country and internationally, and mostly freelance.

To make a change and encourage more women, we need to find them and educate them. Show them that there’s nothing to be afraid of and this musical world is fun and full of adventures. That’s why we needed and now have WILM in the region. WILM provides a very warm welcoming community, with passionate women who are ready to help a girl in need, to show and educate, to support, to make you feel safe and not ignored.

In the future we want to be present as much as we can at public events where we can spread the word and create a comfort space for girls to step ahead and do their dream job without any boundaries! Despite just being seen in the public, we want to focus on creating educative programs so women don’t have any limits in learning new things just because some things don’t exist in our country. 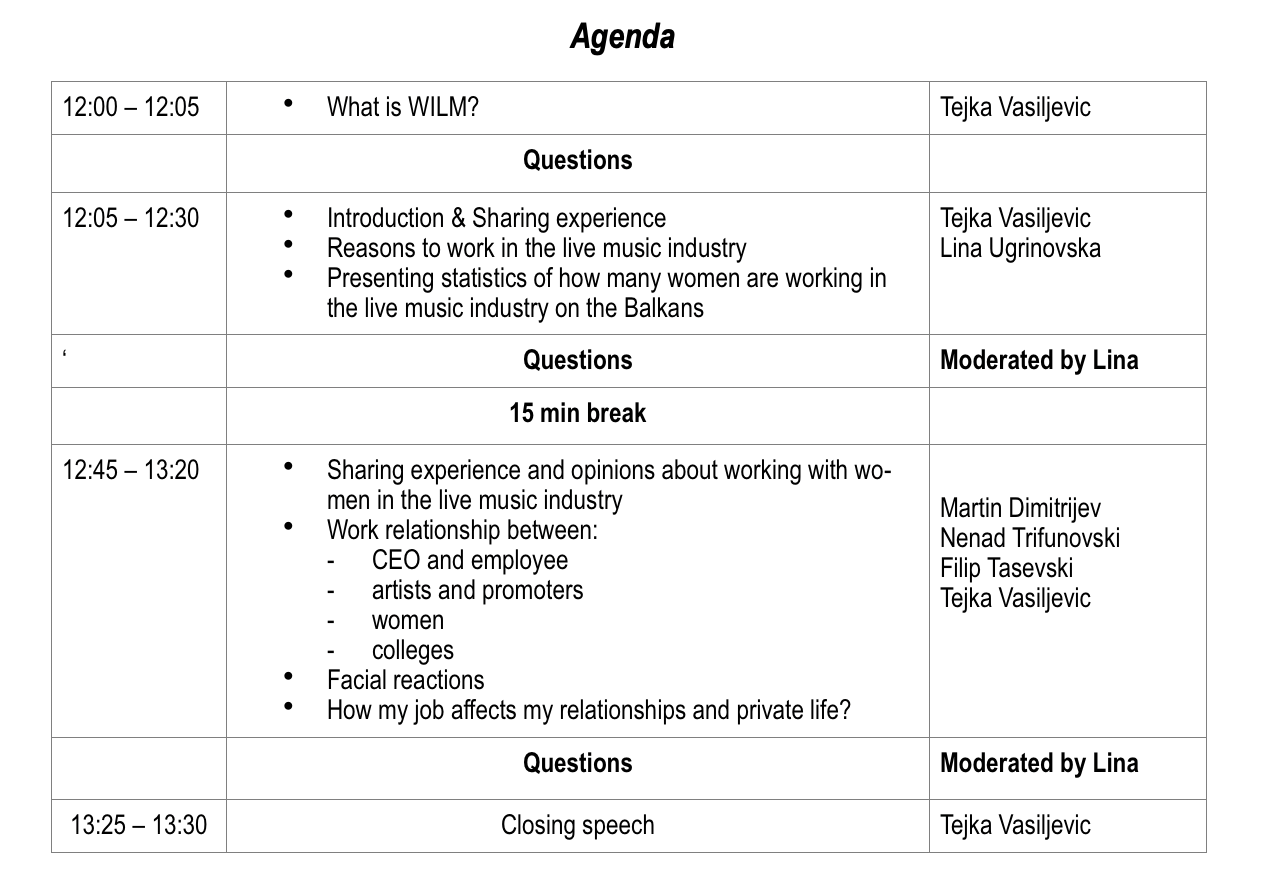